If you have the idea of how the oiler of a Ryobi chainsaw works, you should know the pathway of the oil – traveling from the tank to guide bar, moving with the chain, again and again. Indeed, it’s a long journey!

But how long can the oiler do its job with no disturbance? After a while, it would face oil clogging, leaking, damaging and at a time won’t work at all. And, as it’s a common occurrence, the question arises on how to fix Ryobi Chainsaw oiler not working?

As a whole, you need to find out where the problem is by disassembling the parts and using some tricks. By checking, cleaning, replacing, you can fix your chainsaw oiler; even it’s a very older one.

Hopefully, our tips and tricks below with vital methods would help make your Ryobi oiler work again! 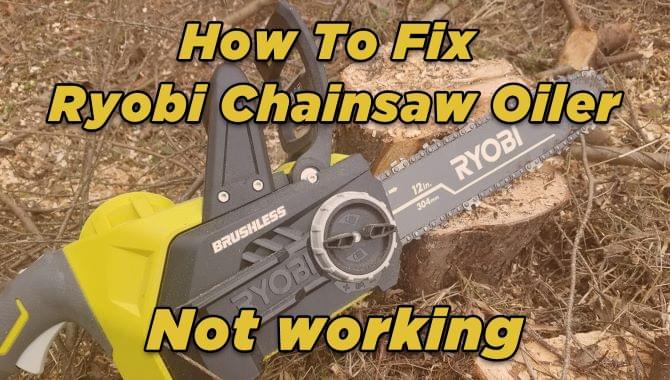 How Do You Know If Your Ryobi Chainsaw Oiler Isn’t Working?

Working with a chainsaw can lead you to face several problems. Indeed, among these all, problems lying with the oiler are easily spotted with some specific signs.

However, these following signs would tell you if it’s time to deal with the oiler of your chainsaw.

What’s next? Indeed, you need to disclose the parts in where exactly the oiler problems are lying and troubleshoot these!

The biggest problem people face with a chainsaw is getting no oil coming out at all. To run the chain smoothly, it needs to have enough oil flow in its way. And, you know, it’s pathway; from the oil tank to the bar.

The Ryobi Chainsaw has an oil pump that automatically controls the amount of oil flowed onto the bar.

If you aren’t sure about enough oil is coming out, follow the tricks below –

Method 1 – Test Run The Chainsaw Without Cutting Through Wood

After running the chainsaw without cutting through wood, check the chain. It should be oily in touch. If it remains dry, your chainsaw isn’t getting enough oil.

Run the chainsaw (without cutting), pointing the bar to cardboard or clean wood or paper. Your chainsaw should throw a light mist of oil on that surface.

A very little or no spray of oil would indicate that your oiler isn’t functioning properly.

Method 3 – Check Out The Oiler Holes

If there is enough oil in the oil tank, few drops should be coming out through the oiler nipple while running the engine.

However, no dropping oil indicates that there must have problems lying between the tank and pump house.

Well, if you already have noticed that the chain isn’t getting enough oil or the pump house is disrupted to producing oil, look for further steps and fix these troubles!

How To Fix Ryobi Chainsaw Oiler Not Working? Explained

Most of the users found their chainsaw not getting oil because of the clogging of sawdust. It prevents the oil flow that travels from the oil tank to the bottom of the bar.

So, while checking out the oiler parts, you need to clean up all the oil ways that are clogged.

So, how would you get access and clean these parts? Well, steps are here-

First of all, turn clockwise the bar tensioner screw to loosen the chain tension. It’s located near the connection point of the bar and engine.

Step 3 – Clean the dirt on the bar drive

After separating the chain from the bar, look for any build-up sawdust, dirt, or oil on the bar drive. Use a knife or flat screwdriver scraping it down to the heel of both sides of the bar guide slot to clean it.

Also, check the bar oiler holes; these should be clear of debris. Clean them using the knife and brush if needed; however, most probably, it would be needed!

After that, get access to the oil pump by unscrewing the oil plate that covers it. Fill the oil tank at the desirable level.

Step 6 – Test the engine to check if oil comes out

Start the engine without covers it on and look for oil drops coming out through the oiler nipple.

Step 7 – Fix the tank if oil drops coming out

In case no oil is dropping, time to deal with the tank of oil. Unscrew the oil cap and slide the pump to disassemble every part.

Step 8 – Use gasoline to clean the pump properly

Look for any damages to the oil pump and clean it out properly. You can use gasoline, wire brush, and rag here.

It would be better to pull the oil pickup and filter out of the gasoline tank, making them disconnected from the line. You should replace them with new parts if you notice damages to that.

Step 9 – Done! Recheck the chainsaw to see if it’s working

Reassemble all the parts and recheck your Ryobi Chainsaw according to the same process mentioned above.

However, if your chainsaw oiler isn’t working at all, take it to the mechanics’ shop; perhaps you need to replace the oil pump with a new one.

Why Does Your Chainsaw Leak Oil When Not In Use? Know The Reasons

Bar and chain oil leaking from chainsaws is a common occurrence. And, the good news is that most of the time, there is nothing wrong founded with the chainsaw if the problem is only leaking oil.

You are wondering- why is that?

While your chainsaw is in the run, the oil pump delivers oil continuously into the groove of the bar so that the chain can move smoothly.

After uses, it’s common to find oil residue on that path which gradually runs down to the chainsaw. You may think it’s leaking oil, but it’s not that.

Retained oil under the clutch cover

While passing through the sprocket under the clutch cover, the chain transfer oil onto the body of the saw as well. The recesses and grooves of your chainsaw retain some of these oils.

Oil around saw body and chain

If you start running your chainsaw without cutting through wood, normally, it will spread a fine mist of oil around the saw body, guide bar, and chain.

Sometimes oil seepage occurs due to temperature variations, and it happens when you overfilled it with the oil and fuel. Even for storage, the overfilled oil tank on uneven surfaces can lead to the same problem.

So, what should you need to do in such a situation?

Indeed it’s normal to have a little oil flow even not in use. But if you notice any pools of oil, you should go for further investigation.

Hopefully, now you know have a clear idea on how to fix ryobi chainsaw oiler not working. Keeping things nice and lubed up is a critical job, you know.

From that view, the oiler of your chainsaw does a lot, isn’t it? So, it’s your duty to let the oiler well working by taking care of it! 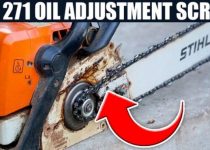 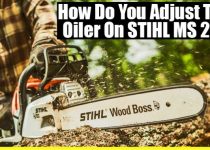 My name is Lance H Manuel. I'm the chief of EditorsVine.